While there is high water levels in Georgian Bay, there are low water levels for Huron-Michigan. Who will pay for restoration of water levels? This problem’s complexity is heighten by climate change by glacial isostatic adjustment. Here is an excerpt from article from Globe and Mail: 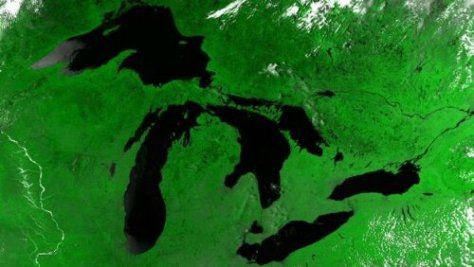 Unfortunately, it’s not so simple. While St. Clair River dredging projects between the late 1800s and 1962 (and probably some further erosion subsequently) did contribute to lower water levels in Lake Michigan and Lake Huron, the decline caused by channel alterations only exacerbates the key driver of water level changes: climate. Scientists tell us that low levels are caused by persistent decline in precipitation, lack of ice and the resulting increase in evaporation. In fact, evaporation is by far the top cause of water loss from the lakes. Scientists’ satellite images and anglers’ unused-ice fishing tip-ups can tell you that the amount and duration of wintertime ice has fallen dramatically since the 1970s.

In addition, the movement of the Earth’s crust in response to the melting of glaciers, a phenomenon known as glacial isostatic adjustment, has also contributed to the apparent drop in water levels, especially around Georgian Bay. Just in the course of my lifetime, GIA has caused an apparent drop of 18 centimetres.

Those who point only to the dredging of the St. Clair River are oversimplifying the dynamics.