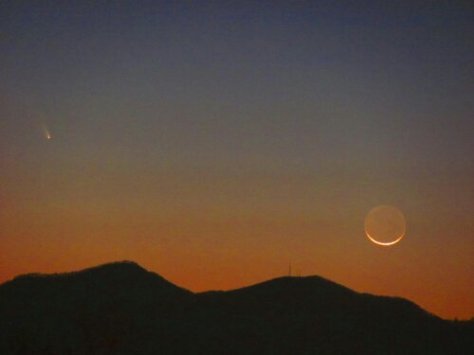 Excerpt from Earth and Sky announcement about heavenly phenomena: North America, March 12 presents a golden opportunity to catch a young moon – and possibly a comet. At northerly latitudes in the Eastern Hemisphere – eastern Europe and Asia – you may have to wait until tomorrow, March 13, to catch the waxing crescent moon. But don’t let that stop you from seeking out Comet PANSTARRS. Start your search 45 minutes or so after sunset. As viewed from North America, islands of the North Pacific (Hawaii) and possibly northwestern Europe, you might – or might not – spot Comet PANSTARRS (C/2011 L4) fairly close to the lunar crescent tonight. If you have binoculars, bring them along with you for they’ll help you to see the moon and Comet PANSTARRS in the glare of evening twilight. http://earthsky.org/tonight/young-moon-low-in-west-after-sunset-march-12?utm_source=EarthSky+News&utm_campaign=795f81a324-EarthSky_News&utm_medium=email#.UT9Mu2e3OSw

One thought on “PANSTARRS COMET: Young moon and comet low in west after sunset March 12”